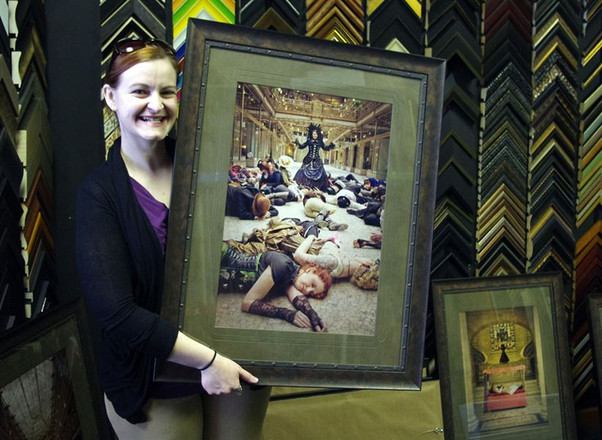 MANDY ALTIMUS STAHL
I have always had a love for photography, taking my first picture at age 4. I was raised in a very artistic and encouraging home. My other creative endeavors include graphic design, websites, documentary film, improv comedy, singing and more.

About our Name Change:

Philosophy
Over the years, I have searched through many different creative mediums, trying to find the one allows me to express myself in a natural way. I've experienced film, dance, choral singing, and painting. It was through photography that I found my voice, my creative passion and the ideal medium to share my dream world with others.

My photographs depict stories of broken hearts, far away lands, love stories, solitude. I convey my emotions and imagination through the style of the photo (close ups and medium), the model (people cast to act in my dreams), the location (unlikely and yet real), and the sometimes strange colors. My photos usually end up dark and tinted, which gives the sense you're looking through a portal to see into my created world.

I spend several hours with my models planning, choosing costumes, shoes, jewelry, props, locations, and the motivation for their character. The shots themselves happen organically while we are on location, merging preconceived ideas with happy mistakes. The best ones are usually those that I take when the model doesn't know I am photographing them.

I want each image to be its own unique experience so that viewers form their own ideas about what is occurring in the photograph. It is my hope that they would be intrigued and want to know more.

Exhibitions & Features
My photographs have been featured in several exhibits in Ohio, Michigan, Pennsylvania, and Vermont.  For a full list of exhibits, awards, and publications, click here.

Mandy Altimus Stahl graduated from Kent State University with a BA in history, summa cum laude with honors. Her day job is a museum archivist. Altimus Stahl has produced films such as Prodigal Daughters, The Legacy of Steel, Adaptations, Seafaring Forefathers, The Greatest Generation, and Faces of Rural America. She has an extensive list of lectures available. Since 2012, she has traveled across Ohio to deliver her lecture on the sinking of the Titanic more than 40 times. Altimus Stahl has been asked to be the plenary speaker for the Society of Ohio Archivists 2016 Spring Conference. She is proud to serve on the Massillon Historic Preservation Commission and the Charity School of Kendal Foundation Board.

In 2015, Altimus Stahl and her family published her grandfather’s World War II prisoner of war memoirs, Forced March: From the Bulge to Berchtesgaden by Major John J. Mohn, for the 70th anniversary of the end of the war. She has traveled across the state, lecturing about World War II and sharing his story.

She was proud to have appeared on the Travel Channel’s show “Mysteries at the Museum” in Season 8, Episode 2 (2015), retelling the tale of Jacob Coxey’s 1894 protest march from Massillon, Ohio, to Washington D.C. In 2017, Mandy Altimus Stahl published an Images of America series book through Arcadia Publishing, Early Massillon and Lost Kendal, sharing 199 images that depict the history of the Massillon, Ohio area from 1812-1860.

Altimus Stahl is a member of the Massillon WestStark Chamber of Commerce. Her photographs have been exhibited in more than 25 invitational and juried shows in Ohio, Michigan, and Vermont, published in the highly competitive International Photography Annual (INPHA 2 and 4), produced by Manifest Gallery in Cincinnati, Ohio (2014 and 2016), and have won several awards.
Her one-woman photography exhibit A Long Time Ago: The Fairytales of Mandy Altimus Pond debuted at Translations Art Gallery, Canton, Ohio in 2014, and traveled to Lynden Gallery in Elizabethtown, Pennsylvania in 2015. Altimus Stahl has been featured in About Magazine in 2013 and 2016, as well as local newspapers the Massillon Independent and Canton Repository.

She has published two photography books, A Long Time Ago, and Images of World War I, a collaboration with Faircrest Memorial Middle School and ArtsinStark to teach students about World War I and recreate photographs from the war. She was the recipient of a 2015 ArtsinStark special projects grant, and produced the exhibit Face of Hunger in Stark County, Ohio. In 2017, she collaborated with the Kent Area, Ohio Chapter of the Links, Incorporated to teach middle school students to take photographs, and supervised them as they documented their world and Haven of Rest homeless shelter in Akron. Their photographs were exhibited at the Dr. Shirla R. McClain Gallery of Akron Black History and Culture at the University of Akron, and one student’s photograph placed in the Links national competition.